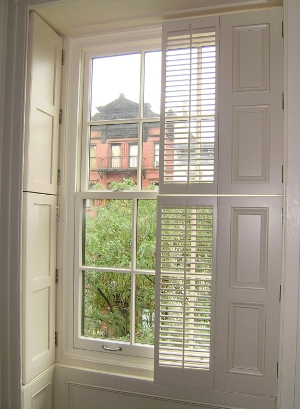 Raised panel shutters can add a particular charm that other styles can not provide. Obviously, the paneled area of the interior shutters is not as versatile as movable louvers and need to be opened to the side of the window open to provide light and visibility. Some windows have the horizontal space outside of the window opening for this functionality. Raised panels can be mixed with louvered shutters to create a distinct and stable look. The picture here shows a shutter unit with the outside panels with raised panels and the inside panels with movable louvers. This particular unit is in a double tier configuration with four panels across the top and four across the bottom. Some custom interior shutter suppliers do not publicly offer raised panel shutters because they do not sell in the volume that louvered shutters do. So, just ask.